SU Athletics in the News

But SU head coach Ametrice Jackson was pleased with the way her team fought from behind in its first game of the season. 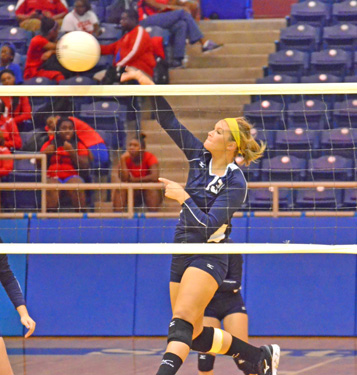 “You should have seen me in the huddle after the game,” Jackson said. “I was about to cry I was so proud of those girls. That’s how I want them to fight back. You never give up.”

That would have been easy to do on a couple of occasions for the Lady Bison.

In the first game of the match against Lawson, SU fell behind 14-8 then rallied to take a 15-14 lead. The teams swapped the lead several times leading up to a 23-23 tie. SU eventually broke through to claim the first game 26-24.

Lawson forced a deciding game three with a 25-12 win in game two in which SU fell behind 16-6 and never recovered.

True to form, SU fell behind 5-1 early in game three. The Bison again rallied to take a 6-5 lead. The score was knotted at 10-10, but Lawson scored the next four points to give themselves four opportunities to seal the match.

They couldn’t do it.

SU scored four straight to tie the game at 14-14 and eventually pulled out the win with a 19-17 victory in game three.
Jackson said some first-game jitters may have contributed to the slow start.

“They had nerves at the beginning I think, but after the first couple of points – especially for the sophomores – the nerves went away,” Jackson said.

A couple of freshmen drew high praise from Jackson for their performances on Saturday. Woodland’s Madison Story had several strong kills in the Lawson game in her first collegiate action.

Marey Woodard, a freshman from Wellborn, also drew rave reviews from Jackson, who called Woodard Southern Union’s MVP of the tournament.
“She was kind of like our secret weapon. I think Lawson didn’t expect her to come out and be as powerful as she was,” Jackson said. “She did a little bit of everything. She’s like a ninja. You never know what’s going to come out of her.”

Sophomores Ariel Diaz, Shavante’ Burt and Caroline Simpson had a good tournament as well. Simpson suffered a dislocated shoulder during the tournament but continued to play through it.

“I didn’t even know about it until they told me at practice after the tournament,” Jackson said. “She popped that sucker back in and kept on playing. She’s a trooper. Those are the type of girls I want on my team.”

This was the first year that Southern Union hosted a tournament to start the season. Jackson said it was a good experience and that SU will probably host again next season.

“Now I know what to expect,” Jackson said. “I wanted us to win, but overall I’m glad for the way that it went.”

The Lady Bison will return to action on September 2 at home against Wallace-Hanceville at 5 p.m.

Under the leadership of head coach Ametrice Jackson and Assistant Coach Regina Smith, the season gets underway Saturday, August 22 as the Lady Bison holds a season opener tournament at SUSCC. Scheduled to participate in the tournament are Snead, Faulkner State, Lawson, Jeff Davis, Wallace Selma and Southern Union.

The following Tuesday, August 25, the Bison stay in Wadley to face Gadsden State, followed by a home game against Wallace State on September 2. The Bison then hit the road playing several conference foes and attending two tournaments.  October will feature home games on October 1, 3,7,14 and 17th. The regular season comes to a conclusion as the ladies travel to Bay Minette to take on Faulkner State on October 26. The ACCC State Tournament will be held in Hanceville October 30-November 1.

All home games are played at the Sports Arena on Southern Union’s Wadley Campus.  Admission is free to SU athletic events.  A complete volleyball schedule can be found at www.suscc.edu .